Chris Malone, a football coach for the University of Tennessee at Chattanooga has lost his job due to comments he made about politician and activist Stacey Abrams on Twitter.

Chris Malone reacted to news of Democrats winning control of the Senate in Georgia and tweeted against Stacey Abrams, who ran as governor for the state in 2018.

“Congratulations to the state of GA and Fat Albert @staceyabrams because you have truly shown America the true works of cheating in an election again!!! Enjoy the buffet Big Girl! You earned it!!! Hope the money was good, still not governor!” 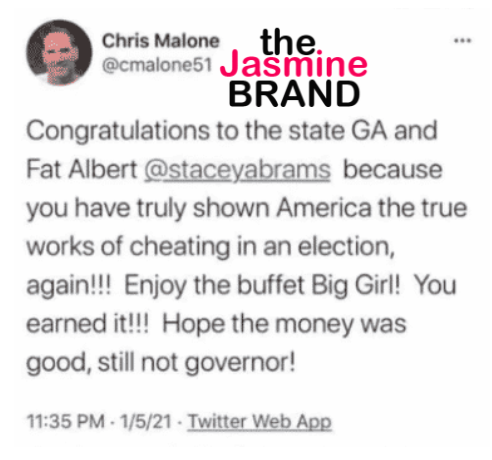 While he deleted the tweet, it still went viral and the school’s chancellor Steven Angle condemned it as he announced the decision to fire Chris Malone.

“Yesterday, Chris Malone, UTC football coach, posted a tweet regarding Stacey Abrams. That tweet was hateful, hurtful, and untrue. Coach Malone is no longer a part of this university. University faculty and staff are expected to lead in a way that achieves and maintains a respectful and tolerant, civil campus environment.”

“The University of Tennessee at Chattanooga does not tolerate and unequivocally condemns discrimination and hatred in all forms.”

Chris Malone was in his second season as an assistant and offensive line coach for the university.

What are your thoughts on the coach getting fired? Comment and let us know.