Teddi Mellencamp of Bravo’s “The Real Housewives Of Beverly Hills” is selling the mansion that rapper Pop Smoke was fatally shot in earlier this year.

According to the L.A. Times, the Hollywood Hills home is now on the market. It has five bedrooms, 5.5 bathrooms with white porcelain floors, and an infinity-edge swimming pool.

Pop Smoke was killed while renting the home in February. Teddi Mellencamp released a statement about the tragedy and said:

“Early this am we were informed by a 3rd party leasing and management company overseeing a rental home we own in Los Angeles that a shooting had taken place at the property.” 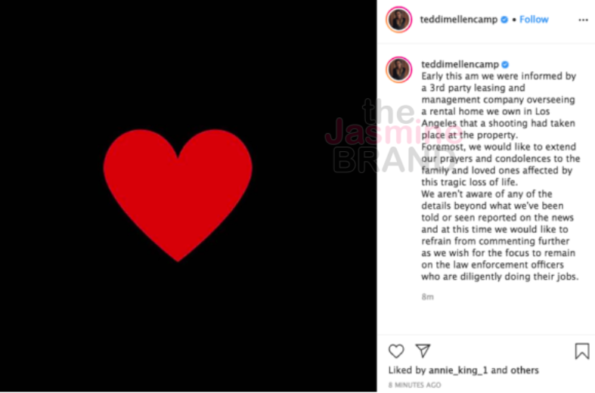 “Foremost, we would like to extend our prayers and condolences to the family and loved ones affected by this tragic loss of life. We aren’t aware of any of the details beyond what we’ve been told or seen reported on the news and at this time we would like to refrain from commenting further as we wish for the focus to remain on the law enforcement officers who are diligently doing their jobs.”

Four of the five suspects named are facing murder charges. Two of them, Corey Walker and Kenadre Rogers, could get the death penalty, or life in prison without the possibility of parole, according to reports.

Two of the minor suspects, one 17 and one 15, have been charged with one count of murder a robbery.

While the fifth suspect, Jaquan Murphy, was arrested for attempted murder, the L.A. County District Attorney’s Office has not reported charges against him.

According to reports, two men wearing hoodies and masks, broke into the house firing multiple shots, striking and critically wounding the rapper. The men fled the scene and Pop Smoke was rushed to Cedars-Sinai Medical Center in West Hollywood where he was unfortunately pronounced dead.

What are your thoughts on the home being for sale? Let us know in the comments.