10 Reasons Why You Should Love Big Boobs 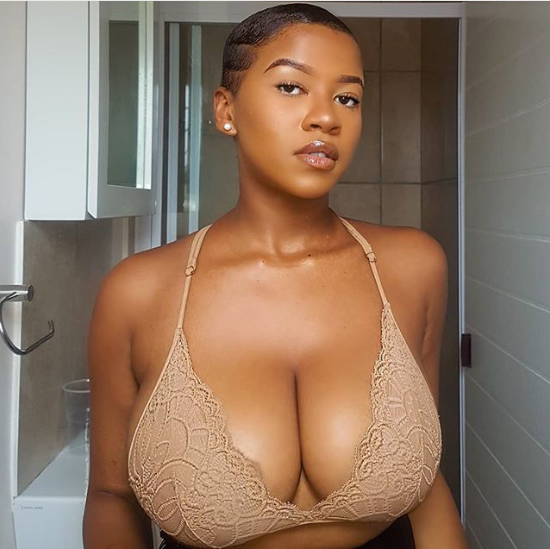 South African based-Nigerian model, Abby Chioma Zeus who is the founder of The Boob Movement has listed 10 reasons why men should love big boobs.

There are women who DREAM of a full cleavage every hour of every day! Us busty babes may not be ablable to button our shirts all the way to the top, but we’ve got something to makeup for it.

Ever wondered why your man always falls asleep on your chest? That’s because tatas make the best cushions!

4. YOU CAN HIDE ANYTHING IN YOUR BRA

Be it money, a cigar, your phone, bank cards, candy ALL OF IT. It can all fit in your bra if it’s big enough.

You don’t have to say much! Your boobs do the talking. Just smile and agree with them.

6. WHEN YOU COVER UP, IT LEAVES PEOPLE WITH MYSTERY

7. YOU DON’T NEED A LOT OF ACCESSORIES

Big boobs are like an accessory all by themselves. You can save a hella lotta money by not buying so many neck pieces and big earrings.

8. THEY ARE FUN TO PLAY WITH

Yes it’s true! Sometimes I pretend I’m a juggler lol. They move all around and it’s kinda fun. Try it!

9. THEY LOOK GREAT IN TIGHT DRESSES

This will have guys lining up to talk to you! Tip: DO NOT WEAR A BRA

In the winter time, even when it’s freezing cold, your boobs will always be a warm place to put your hands (if you’re wearing a bra).

What is the meaning of corona virus? Many of you are asking and frantically searching for an answer well here is a comprehensive background Information of this deadly virus.

Mama Still Got It: Mother And Daughter Bursting It Together On Instagram Live……Mother Goals?

Should we call this mother goals or what? A mother and daughter were caught throwing their cakes on live Instagram, they looked like they were competing against each other and trying to out do each other.

Considering that this is not really what a mother should be teaching her daughter some of you might say but some others might feel it is right and lit AF.

It was gathered that their joint dance videos are a regular occurrence and they are quite popular on Instagram for this, a lot of their fans could be seen in the comments hailing them on.

WATCH THE VIDEO BELOW

Mom Angry At Teenage Daughter For Getting Intimate In the House

A mother was definitely not planning on raising no babies as she went in hard on her daughter in suspicion of her apparently having intimacy with a boy under her roof and she was having none of that.

The video below  captures and shows the moment all this went down, the mother interrogating her daughter, who insists that she did not have intimacy with anyone. However, her mother wasn’t trying to hear what she had to say. She immediately charged at her daughter and   like she was a WWE Pro Wrestler , while shouting expletives. Although the punch was quite shocking, it wasn’t the only one. In the midst of her rant, she charged her daughter a second time,  Then, the video abruptly ended, but the punishment wasn’t over.