Mariah Carey Hints That Her Memoir Could Be Turned Into A Movie - ViralMula.com

Mariah Carey’s memoir ‘The Meaning Of Mariah Carey’ may be coming to a theater near you soon. During a recent interview, Mariah Carey hinted that her latest book, which details the highs and lows of her life and musical career, could possibly be getting a film adaptation. The 50-year-old songstress said,

“The best thing is that we’re keeping on going and that this is a new era. This is a new moment, and we have music and lyrics, combined in a body of work that I feel very proud of.”

“Now I will say that I wish I had another three or four months to work on it, but I’ve been having some conversations with some very creative friends of mine who may or may not be in the world of film and that’s a very exciting prospect for the next chapter of this moment.”

Earlier this month Mariah Carey virtually sat down with Andy Cohen for an episode of Watch What Happens Live and shared that her memoir has been able to help her talk about racism with her children. She said that her 9-year-old son Moroccan Cannon, recently learned that someone he thought was a friend was actually a white supremacist. She said,

“Rocky just got bullied the other day by a white supremacist person that he thought was his friend. It’s like, insane. So, this is the world we live in.” 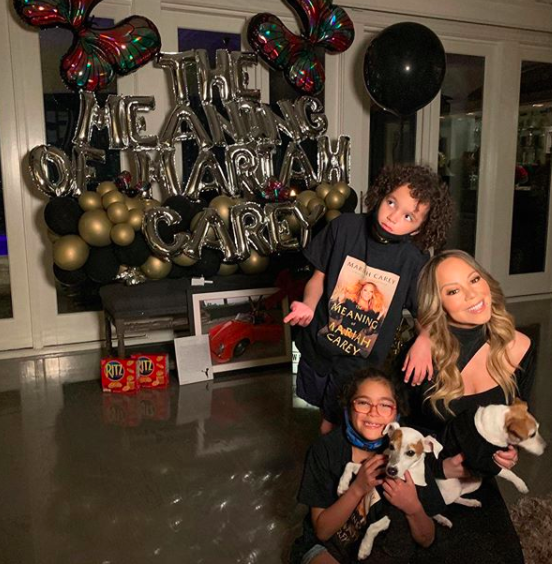 Mariah Carey revealed to Andy Cohen she’s been using her book as a tool to show her children that she’s faced racism and bullies too in hopes that it will help them navigate through those harsh moments in life. She said,

“I’m reading chapters to them that are helping to illustrate my encounters with racism, and how they can then have a greater understanding, and ultimately a greater reservoir with which to deal with the situation itself.”

What are your thoughts on ‘The Meaning Of Mariah Carey’ potentially being a movie? Let us know in the comments.