Kanye West To Give G.O.O.D. Music Artists His Shares Of Their Music + Vows: I'm Wearing Jordans Till I'm On The Board At Adidas - ViralMula.com

Kanye West To Give G.O.O.D. Music Artists His Shares Of Their Music + Vows: I’m Wearing Jordans Till I’m On The Board At Adidas

It looks like Kanye West is leading by example in his battle against the music industry. After previously tweeting that he was determined to get back the shares of his music, he has now promised to pay it forward for his G.O.O.D. Music artists. 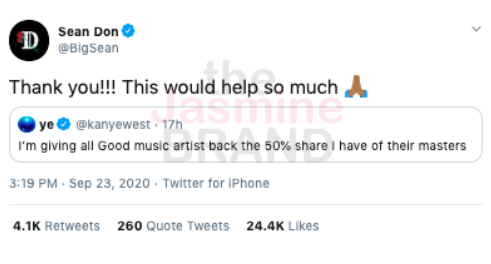 One of his biggest artists, Big Sean, seemed please with the news.

He then challenged Universal to match him as he shared a text exchange between him and Tesla CEO Elon Musk.

But the music industry isn’t the only target Kanye West has right now. Despite a recent 10-year deal with Gap, he also tweeted that he refuses to release anything new with the brand until he’s on the board.

He had a similar message for Adidas and said he would wear only Jordans from Adidas’ competing brand Nike until he’s on the board.

What do you think of Kanye West giving his artists his shares of their music? Comment and let us know.