Javicia Leslie To Star As Batwoman In 2nd Season Of CW Series, 1st Black Actress To Play The Role On TV - ViralMula.com

Javicia Leslie To Star As Batwoman In 2nd Season Of CW Series, 1st Black Actress To Play The Role On TV

The CW‘s “Batwoman” television series just added Black girl magic to their cast with its new leading lady. Variety announced that actress Javicia Leslie is set to fill actress/DJ Ruby Rose‘s shoes as the first Black woman to play Batwoman in a television portrayal. Javicia Leslie gave this statement on her new role:

“I am extremely proud to be the first Black actress to play the iconic role of Batwoman on television, and as a bisexual woman, I am honored to join this groundbreaking show which has been such a trailblazer for the LGBTQ+ community.” 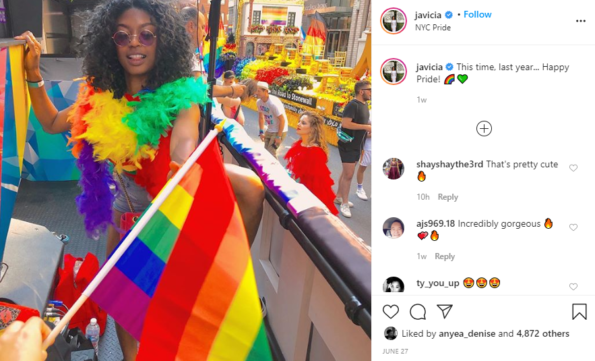 Javicia’s spin on Batwoman will feature the actress as the character Ryan Wilder – an athletic out lesbian who lives in her van with her pet cat. Former Batwoman Ruby Rose – who announced her departure from the series in May – congratulated Javicia on Instagram:

“This is amazing!! I am so glad Batwoman will be played by an amazing Black woman. I want to congratulate Javicia Leslie on taking over the bat cape. You are walking into an amazing cast and crew. I can’t wait to watch season 2 you are going to be amazing!!” 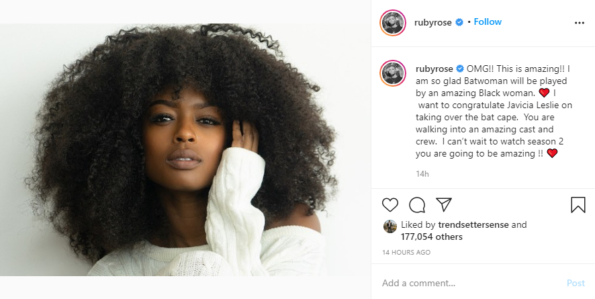 Javicia Leslie has also shined in the BET series, “The Family Business,” alongside the likes of Valarie Pettiford and Tami Roman and the Netflix film, “Always A Bridesmaid.”

“For all of the little black girls dreaming to be a superhero one day… it’s possible!”

Will you be watching Javicia Leslie as Batwoman in January? Let us know in the comments.