A series of videos are going viral online, showing a woman flogging another woman after stripping her bare.

In one of the videos, a woman, from Agulu, in Anambra state, can be seen flogging a bare woman while asking her if there weren’t other single men around before she chose to have sex with a married man.

“Shame on you. Woman who sleeps with other’s husbands,” she said as she flogged her.

From the videos, it can be gathered that the naked woman slept with the other woman’s sister’s husband.

In another video, the woman asked how many times she slept with her sister’s husband and she said, “two times.”

She asked how much the man gives her and the naked woman said the man doesn’t give her anything.

After flogging her, she opened the gate and tried forcing her to leave the compound naked. A man quickly intervened and directed the naked woman back inside.

In another video, the naked woman can be seen already tying a wrapper after a good Samaritan gave her one to cover her nakedness. But the other woman in orange top kept insisting that the woman removes the wrapper she’s tying and go naked.

“Let her remove the wrapper,” she said repeatedly in Igbo. “Give me that wrapper.” 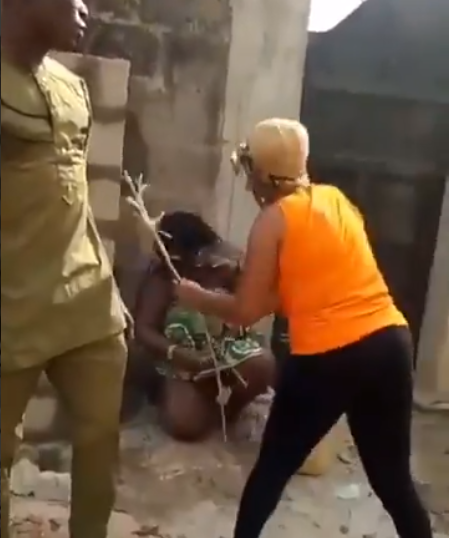 “This is Sodom and Gomorrah!” – Checkout This musical group from Benue engaged in raunchy dancing as children watched

Others in the background begged the woman in orange carrying canes.

“Aunty please,” They all pleaded.

Another woman begged her saying, “Should I kneel down for you? Aunty please.”

But the woman was not appeased.

A man stepped into the scene to say, “We’re all begging you.”

But the woman with the cane warned him saying, “Don’t cover evil.”

The man replied: “Have mercy on her. Forgive her.”

Other voices in the background can also be heard pleading on behalf of the woman clad in only wrapper.

But the woman insisted on punishing the nearly naked woman. She told her to kneel down and the woman obeyed.

After the woman knelt down, the one with the cane turned to the others to ask who gave the woman a wrapper. She then proceeded to ask the girl again to remove the wrapper and go naked.

“She knows what she did was not good,” the others told the angry woman but she shut them up, asking them to “cool down.”

The woman kneeling begged for forgiveness but the woman with the cane refused to forgive her and insisted that she removes the wrapper to expose her naked body.

When the lady refused to remove the wrapper, the woman began flogging her with a belt in her hand while threatening her and saying:

“God will burn you,” she added.

She continued: “You said it’s not today you started licking it. It’s not today. Somebody’s husband.”

After flogging her, she asked her to go home.

Social media users have reacted with anger and asked why the woman didn’t face the cheating husband. Others criticized the naked woman for letting herself get humiliated to that extent without fighting back.

Below are live photos from Shehu Musa YarAdua center where […]

The Peoples Democratic Party (PDP) on Monday reacted as President […]

A video of an unidentified young man who was forced […]

Kenya Grants Citizenship To All East Africans, a move which […]

Alleged Chicken Thief Stripped Bare and Tied Up With His Loot

A small boy who was alleged to be a chicken […]

QUESTION: What Punishment Does The Law Stipulate For Ballot Box Snatching? Death?

President Muhammadu Buhari caused quite a stir on Monday when […]